Ministry
In the not distant future, an A.I. demiurge rules over a wasteland and an orphaned girl with a calling martials an army of vagabonds to take back the world.

Resurrection Story 1: Schaerbeek 4 a.m.
The first entry in a collection of stories about small redemptions.
THE SWAMI AND THE SAVANT: A Historical Fantasy
Nikola Tesla and Swami Vivekananda come face to face at a Gilded Age soirée that also includes Sarah Bernhardt and William James.
China Lake
A Stephan Raszer short

The Org
A New Stephan Raszer short
"The Grotto"
Featured in The Absinthe Literary Review, summer/fall 2004.

The Last Days Of Madame Rey
"Stephan Raszer is a hero in the grand lineage of sleuths with a taste for the esoteric, who rely on unexpected allies and more than the usual five senses as they tackle extraordinary crimes."
--Otto Penzler, founder of The Mysterious Bookshop
Enoch’s Portal
"Dollops of humour and horror and eroticism, a good solid conspiracy, and a hero who is a James Bond for the spiritually uncertain 21st century. Reads like Ludlum by way of Thomas Pynchon!"
--Ian Rankin, author of the Inspector Rebus novels

Exile In Godville: Profile of a Postmodern Heretic
Cover Story, L.A. Weekly, May 2005. 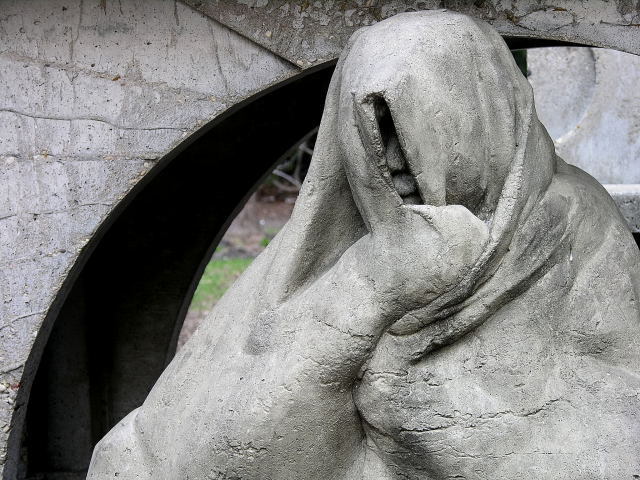 A.W. Hill lives somewhere between Hollywood, Nashville and Alpha Centauri. He has felt a lifelong antipathy toward secret societies, but concedes that this may stem at least partly from the fact that not one of them has ever offered him membership.

Nowhere-Land is the mystical experience, novelized; it is belief, faith and spirituality, described. It’s the visions of Hildegard of Bingen wrapped up in a mystery like an evangelical egg roll. Points in the novel are reminiscent of Plato’s allegory of the cave, surreal moments where the reader emerges from the shadowy confusion of the cave to behold the light and truth outside. While disorienting at first, it’s also extremely rewarding. Forget about putting it neatly in some genre; it’s far beyond genre. It’s like nothing you’ve ever read before, probably like nothing you’ve even imagined before, singular and refreshingly unique. And completely unforgettable.
--Paul Stotts, Blood of the Muse

ON NOWHERE-LAND: The P.I. protagonist, Stephan Raszer, is part skeptic, part Hollywood Hills mystic, a dreamer pulling dreamers back from beyond the edge, as evolved as a tough guy can be and vice versa . . . as complete a male protagonist as is probably possible in the 21st Century. What struck me this time out is how, a la Chandler, A.W. Hill manages to stake the plot of the soul on top of the plot of the story, making for a page-turner that tries not to be more but can't quite help it--guilty and spiritual pleasure dancing on the head of a pin.
-ALAN RIFKIN, author of SIGNAL HILL STORIES and ALT.COUNTRY

from: MINISTRY, a new novel by A.W. Hill

From the stockade, I heard a snap, a growl, and a squeal, and even without seeing I knew one of the dogs had broke loose. All I could see now was chaos inside the stockade, and then there were two gunshots, and quiet. I put my head down and shook. Our dogs were dead.

With Angus in the lead, they came through the gates and fanned out, twelve in a line, rifles aimed just above our heads.

“Give it up!” he cried, and a shot followed.

A second bullet slapped into a tree trunk just behind me, sending a shower of bark over our heads. Alice and Irina screamed and went down on their bellies, and Agnes crawled over to my side. The third bullet exploded through one of our food crates and out the other side, lifting the hair on Loïc’s head, and scaring him into pulling his own trigger. It was a wild shot, but still managed to graze the ankle of one of the Citadel men, setting off a volley from their side, bullets so close that if I dared raise my head I’d be gone, and likely my little boy, too. I had him crunched down under me and I could feel the sobs shake his body. I looked up to my right at the sound of a bolt snapping and saw that Noah was aiming to return fire. Then something seized me from the inside-out, like a hand reaching out from my heart, slowly lifting me out of the trench. I slapped the barrel of Noah’s rifle down and shouted, “No! Don't shoot.”

I felt Paul and Agnes and Astrid all tugging on me, trying to pull me back down, but whatever had hold of me was stronger than the three of them. I know my legs must have been moving, my hands grasping roots and vines to get out, but I felt none of it. What I felt was lifted and set on the ground, January moonlight on my shoulders. I was eighty feet away, but close enough to see the boil on Angus’s face and the fury in his eyes. I had my hands out. A bullet flew past my left shoulder and Paul screamed out, “Hold your fire, goddamnit!” When he scrambled out of the trench and grabbed my leg I turned and said one word. “No.”

It was his reaction to that word that told me I had something or someone with me, because he let go of me and slipped back into the trench. My fingers were fluttering now and it felt as if lightning were passing from one hand to the other.

“You did wrong, Angus,” I said loud and clear. “You took these girls from their freedom. You’re an Atrophine, like us, and you sold your own into slavery. You killed our dogs. You can’t trade with the Devil, Angus. If you do, the last trade will be your own soul.”

I can’t say what voice they were hearing that caused them to move back just the tiniest inch as I approached them. I heard only my own small voice trapped inside the cage of my chest. But that can’t be what they heard. I saw this in their eyes.

“You can kill us,” I said. But there’ll be hundreds, thousands more behind. Sooner ‘r’ later, you’ll have to make a choice. Make it now. Join with us. Take the world back.”

I took another step forward and thought I saw a shudder go through his ranks.

“Who the hell do you think you are?” Angus spat.

I thrust my fist in the air, right up at that cold, white moon and its unsaying face, and answered, “I’m Isobel Christmas Lemont. I’m the messenger.”

“And the message, too,” shouted Noah from behind.

I saw no more movement of their ranks until suddenly Agnes and Alice were at my sides, and then Irina and Neema, and Anaïs and Astrid and Delilah. In that moment, and for only that moment, I heard my true voice, the one Angus was hearing, and it had a holy terror that thrilled and frightened me. It was a woman’s voice that admitted of no doubt.

When Angus’s men moved only as far as the stockade gate and readied to fire again, I walked toward him, reciting those spell words from the queen whose power filled me.

Like spooked cattle, the men of the Citadel broke ranks as I drew near, some moving back as far as the raised wooden landing at the entrance. Angus remained at the head of their crumbling wedge to the very last, trying to rouse himself for one final shot, one last shout of resistance, but his tongue had been stilled. When he’d backed up to the landing, I said,
“Abandon this place. Come to Valley Forge. The Resistance is for you, too.”

He narrowed his eyes, and this made me angry. I reached in my pocket for the flint and fire stick and, repeating the queen’s words, threw a shower of sparks on the gasoline-soaked ground. A wall of flame surged up, running the width of the stockade and all the way to the gates. As they covered their faces and backed inside, I called out, “Back doors’s open!”


I was told to take a stool opposite him, and Agnes took one next to me. He said to me, in a tone with a bit of my father’s softness, “You see, Isobel, there really is just one hope for us, and that’s to leave the earth in a form better than that in which we arrived. I’m sorry you won’t be with us. You gave it up for the God in that book.”

“Not that God,” I said. “At least not the way he’s described. His laws were good, mostly, and his prophets were wise, but in other ways, he was a tyrant, just like you.”

“One you’ll never see,” I answered. “One you can’t use second order axioms to kill.”

That last part, which had been the gift of Rabbi Eliezer, seemed to throw him.

“Ah, well let’s get this done so that you can see him sooner,” he said, recovering. What is your Section 144 challenge? A logic puzzle cooked up by one of your ‘crafters?’”

“Neither of those,” I said, handing him the paper. “It’s this. You have to disprove it.”

“With pleasure,” he said. He scanned the proof. “Yes, yes, you have done some homework. Early twentieth century logic. Modular. I think I know this…”

“Yes,” he said, running his finger over the symbols. “With a little adjustment at the end. No concerns. That just means it may take me twenty seconds rather than two to falsify it.” He got up from his stool and began to walk to a computer terminal about twenty feet distant, fanning himself with the paper and humming a tune.

“You don’t really care about the truth, after all, do you?” I called out.

He stopped, turned, and said, “What is truth?” Then he laughed and added, “You know, Isobel…or you ought to…that there is no outside text! There is no metanarrative. There is only circumstance and decision.”

I didn’t know this, but I took its meaning that the only truths are the ones we make.

Imagine you could change your reality with the flip of a switch...

Midwestern gothic tale of a boy who longs to repair the crack in the world. Now Available In Kindle Format

"An eruption of a book that is quite likely to take up a sort of illicit residence in your skull" -- David Freeman, author of The Last Days Of Alfred Hitchcock

Gritty and transcendent, author A.W. Hill takes the reader from the hills of Hollywood to the mountain-lands of Turkey, Iran, and Iraq on a search for God. Simply put, Nowhere-Land is a guy’s book any chick would dig. From the eerie cover to the final chapter this book has enough suspense and chills to cool even the hottest summer day.