Ministry
In the not distant future, an A.I. demiurge rules over a wasteland and an orphaned girl with a calling martials an army of vagabonds to take back the world.

Resurrection Story 1: Schaerbeek 4 a.m.
The first entry in a collection of stories about small redemptions.
THE SWAMI AND THE SAVANT: A Historical Fantasy
Nikola Tesla and Swami Vivekananda come face to face at a Gilded Age soirée that also includes Sarah Bernhardt and William James.
China Lake
A Stephan Raszer short

The Org
A New Stephan Raszer short
"The Grotto"
Featured in The Absinthe Literary Review, summer/fall 2004.

The Last Days Of Madame Rey
"Stephan Raszer is a hero in the grand lineage of sleuths with a taste for the esoteric, who rely on unexpected allies and more than the usual five senses as they tackle extraordinary crimes."
--Otto Penzler, founder of The Mysterious Bookshop
Enoch’s Portal
"Dollops of humour and horror and eroticism, a good solid conspiracy, and a hero who is a James Bond for the spiritually uncertain 21st century. Reads like Ludlum by way of Thomas Pynchon!"
--Ian Rankin, author of the Inspector Rebus novels

Exile In Godville: Profile of a Postmodern Heretic
Cover Story, L.A. Weekly, May 2005.

Partial draft manuscript from a work-in-progress inspired by the thinking of my friend and patron, Dr. Mani L. Bhaumik. A scientific search for the changeless in nature.

JACOBUS ROSE is a fifteen year-old of above-average intelligence who believes--as many fifteen year-olds do--that he has a below-average life. School is populated with the usual bullies and unresponsive girls, and his parents' marriage seems to be imploding before his eyes. 'Maybe I was born into the wrong world, ' he thinks. Lured by his best friend, CONNOR, into a strange little house containing nothing but empty rooms and an oversized circuit breaker, he will discover that reality comes in a plural form, and that our choices create a continuous network of branching worlds, any of which is as 'real' as another.
WOULD YOU PULL THE SWITCH?
Review from Offbeat YA
Reviews from Goodreads
NetGalley
Read & Review an Advanced Copy of The Switch

Imagine that you could change your reality with the flip of a switch. You might be prettier, richer, more popular. Or you might find yourself in the eternal twilight of a world in which history had taken a very wrong turn. That's the chance you take. A young adult novel for all ages, conceived by Nathanael Hill and developed with A.W. Hill. Especially for those with fond memories of A WRINKLE IN TIME. Curiosity Quills Press, August 2017

AN EXCERPT FROM THE SWITCH:

As fast as I could, I closed the door, slipped off my backpack, and leaned against the sink to get my wind back. I stared down at the drain, imagining that my life was going down it. It even gurgled at me. I turned on the cold water and splashed some on my face. As I came up, I naturally looked in the mirror, and if I didn’t scream, it’s only because no sound would come out of my throat.

The kid looking back at me from the mirror was my age—that was, fourteen at this juncture—and genetically speaking, I guess he could have been my brother, but not my twin. He had a different nose, for one thing. Not big, exactly, but fleshier than mine. My nose was thin and kind of boney, my dad’s nose. Also, my real skin was what people call ‘fair,’ which is to say I was pretty much of a white boy. The kid in the mirror had a kind of natural tan. More like my mom’s Mediterranean skin. And his mouth was fuller, more pillowy. Like some fashion model or a rock star.

It was the last observation that did it. I couldn’t deal with those lips. It felt like having a prosthetic face on that I couldn’t peel off.

I didn’t think. I didn’t say anything. I hefted my backpack onto one shoulder, scuttled out into the hall, and then ran the hell out of that apartment, my red-haired mother calling after me. At that moment, I didn’t care. She was calling after somebody named Jerrold. It’s only out on the street that it occurred to me. What do you call running away from home when your home isn’t your home and you aren’t you?

You call it a living nightmare.

Nobody can know anything about suicide. Not whether it is an act of cowardice or valor, selfishness or selflessness, and never why. Every suicide must be preceded by an adding-up of agonies that cause existence to contract like the beam of a spotlight until there is nothing outside the pinpoint radius of its light.

A Stephan Raszer short, in which Raszer finds the abyss at the heart of the Celebrity Center.

After a Jehovah’s Witness girl is abducted in conjunction with a ritualistic triple homicide in the mountains outside of Los Angeles, the church engages cult specialist Stephan Raszer to track her. Based on evidence that the girl may have been trafficked into a sex and terrorism ring with a Middle Eastern nexus, Raszer soon unveils an inside-out reality that begins on the Web and ends in a fabled fortress on the borderlands of Turkey, Iran, and Iraq, where a powerful figure known only as the Old Man of the Mountains holds the strings.

"Hill has written an astute thriller, focused on religions and cults and the way they’ve been used to master civilizations. But Nowhere-Land is also about what might be called the very new cults of Internet game playing, and how role-playing games move from the Web to the real world, from “make-believe” to more chaotic fictions that can spawn terror when dark minds gain control. In Nowhere-Land, the world feels like it’s in a pre-Apocalyptic state: There’s a war on for its soul. You could say it’s a story of our time."
--Judith Freeman, author of The Long Embrace (L.A. Weekly)

“The Last Days of Madame Rey is an eruption of a book that is quite likely to take up a sort of illicit residence in your skull.”
--David Freeman, author of The Last Days of Alfred Hitchcock

“From the bedrooms of Hollywood to the gates of death, psychic sleuth Stephan Raszer stalks both a killer and a conspiracy through the occult lizard-brain of uppermost California's secret spaces. A. W. Hill has given us a real brain-kick of a book."
--Sarah Smith, author of The Knowledge of Water

Novelist A.W. Hill has drawn on the threads of the infamous Solar Temple and Heaven’s Gate cult suicides to fashion a visionary detective yarn, which involves a five continent treasure hunt for spiritual truth as old as the Pyramids. Steeped in history but as current as tomorrow’s headlines, Enoch’s Portal ventures down one dark alley after another, knitting together intrigues as outwardly unrelated as the Swiss Bank scandal, the Masonic conspiracy and the Knights Templar.

"In his debut novel, Hill takes a daring leap into an unknown world as dark and scary as any faced by his protagonist: the genre-bending occult/detective/thriller novel. Stephan Raszer, cult-busting private eye, comes on like a cross between Mike Hammer and Fox Mulder. Not content with smoky stakeouts and beating leads out of informants, Raszer is a new kind of gumshoe for a New Age. He knows that behind every religious con there lurks the possibility of real forces with real powers to be reckoned with. We follow the shamanic shamus to Prague, where he is trying to rescue a Hollywood wife before she commits suicide in a bizarre death-cult ritual. Will he discover what's really going on before it's too late? Hill's swift and nimble prose falls like poetry on the mind's ear, and he drops enough occult references to induce just about anyone into picking up a sacred text and doing some sleuthing of their own."
-- Book Soup Reviews, Book Soup on Sunset, West Hollywood, CA 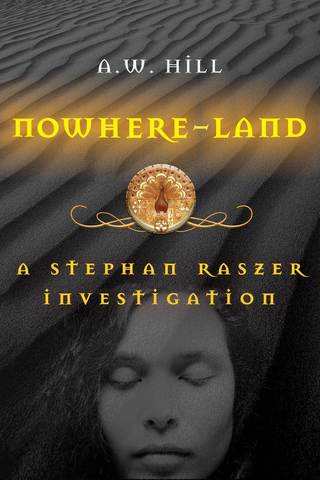